I CAN USE THAT WORD BUT YOU CAN’T!

Bitch. Talk about a controversial word. In the dictionary, the word bitch simply means a female dog. Some people think this word is “bad,” as in entirely pejorative, but is it really? It depends on one’s perspective…and who’s saying it?

Like most “sensitive” words in our society, the usage of this word is really about context: Who is using this word? When is it being used? Why is it being used? Depending on the answers to these questions, using the word bitch may or may not appropriate. Let’s take a look. 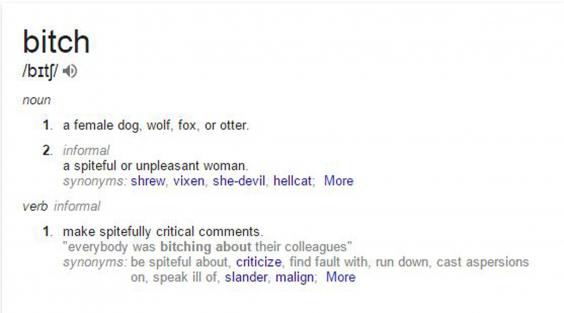 The word bitch originated in Europe from the Old English word bicce, or female dog. The word “dog” has been used often enough since ancient times as an insult for this word to carry a negative connotation at the forefront of its existence. In the fifteenth century, it began to be used specifically as a derogatory term for women with loose sexual behavior and blatant promiscuity. This lessened in severity to the “sensual woman,” and, of late, has actually come into the feminist realm as a positive term qualifying a woman’s determination, ferocity, and edginess. This came around the time that women gained the right to vote in through the Nineteenth Amendment. This, of course, led to further desecration of the term when men, enraged by the flip, began using it in a derogatory sense once again, all of the time.

So, the word “bitch” today can vary from endearing to extremely offensive, depending on the context within which it is used. What is the appropriate context, then?

Today, most politically correct individuals would agree that the only group of people who can use this word without remonstration are women, amongst themselves, and to themselves, within established close “friend” circles. Anything outside of that is pretty much a straight-up insult.

In those contexts (of women to women), the word “bitch” can be used to display a wide variety of emotions. It may convey confusion or anger. It may convey happiness, sadness, fear, or frustration. It may even convey the excitement of having some previously unknown information to share or the hilarity of a certain moment.

This, of course, led to further desecration of the term when men, enraged by the flip towards women’s empowerment, began using it in a derogatory sense once again, and this time more pervasively. This word was and unfortunately continues to be wielded as a weapon, meant to strip women of dignity and strength. That is why the word “bitch” is currently considered a cuss word: for the majority of the time, men have used it as an expletive to subjugate women to their own dominance.  Not okay by any means.

In certain situations, using the word “bitch…” with a pause following can indicate to act with extreme caution. Other times, it can evidence excitement the woman has about showing her friends something new or planned. These positive reappropriations of the term allow for dynamic and fun social models.

However, one should recognize that the positive connotations of the word bitch can be felt only within the informal context of a female-only group. The term bitch is still considered offensive if it is used anywhere outside these confines, and particularly whenever used by a male figure (do not confuse male with male homosexuals…that’s a whole other article. They are part of the female community).

So…if you’re a man, don’t use the word bitch. Just don’t do it. And if you’re a woman, be sure to use it only amongst your very close female-oriented friends.

Those are the rules. Now play nice.