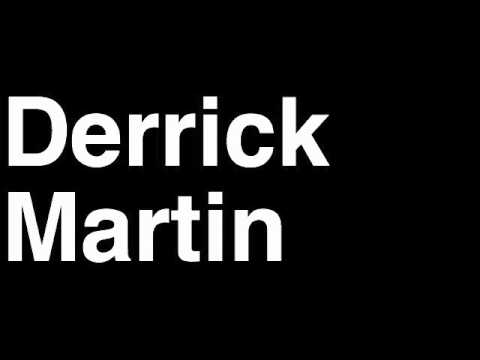 On May 16, 1985, in St. Louis, Missouri, a champion was born.  Derrick Martin, born to a single mother, went on to become one of only three NFL players to win back-to-back Super Bowls with different teams.  Derrick’s mother, Rhonda Martin, moved herself and her young son to Denver, Colorado when Derrick was just five years old.  Raised by his mother and uncle, Derrick began playing football in Denver P.A.L. at the age of seven.  His love for the game was immediate, however, indications of his preternatural athletic ability were not evident until junior high school.  Once Derrick began playing competitively in 7th grade, others began to take notice of his raw talent. Derrick’s natural athletic ability coupled with the support of his mother paved the way for what would ultimately lead to a full-ride scholarship and a professional football career.

During high school, Derrick struggled at times with wanting to be the class clown. It was his desire to be funny that led him to be disciplined by teachers for talking too much in class. Despite the occasional discipline, Derrick did grasp the importance of an education, graduating from Thomas Jefferson High School with a 3.7 GPA.  When asked about his high school football career, Derrick refers to his time at Thomas Jefferson High School as a blessing.  He fondly recalls catching the 5:10 am bus in order to get to school in time to play football. He played Varsity all four years and was an All-State selection for both football and basketball. If that was not enough testimony to his athletic prowess, he also placed 1st in the 4×100 meter relay, with a record-breaking time. During a senior year basketball game, Derrick was recruited to play football by the University of Wyoming, Defensive Coordinator, Mike Breske.

Undeniably talented, the thing that truly set Derrick apart from other gifted athletes was his extreme drive and confidence. Once he began to see the results of his disciplined training, he grew more and more confident in his ability. This confidence propelled him to take his training to the next level. He then began to set his sights on possibly turning football into a career.  With a full-ride scholarship to the University of Wyoming, Derrick surely made his fans proud by scoring a touchdown his very first time touching the field as a freshman.  Derrick went on to play at the University of Wyoming through his junior year.  His time at Wyoming was marked by competing against some of the nation’s best wide receivers in man to man coverage.

After completing his junior year, Derrick made the difficult decision to leave school early with the hopes of making his NFL debut. This was a scary decision because there was no guarantee that he would get drafted.  Derrick trusted his instinct and knew he was ready to go pro.  Derrick was drafted by The Baltimore Ravens and went on to play for the Green Bay Packers, New York Giants, New England Patriots and the Chicago Bears.  In 2010 and 2011, Derrick won Super Bowl XLV and XLVI with the Green Bay Packers and the New York Giants, respectively.

After eight years in the NFL, Derrick, his wife, Alexa Martin, and their four children decided to return home to Denver.  Derrick felt a strong internal pull to return to where his football career began.  Derrick is now the Head Coach at Thomas Jefferson High School in Denver, Colorado.  He characterizes this return to his alma mater as an honor and a blessing. It is safe to say that Thomas Jefferson High School is thrilled to have a former-player-turned-NFL champion back on their field.  Derrick’s players look up to him as an extraordinary athlete, coach, and mentor.

Legacy is an important word for Derrick. In fact, legacy is the very fuel that ignites him each morning as he sets out to make a real difference in the lives of his players.  Derrick realizes that some of his players will not play football beyond high school. It is this awareness that motivates him to develop a team that enjoys the ride and makes memories that last a lifetime.  Derrick’s motto: “I am somebody and I will succeed.”  Derrick desires to leave a legacy where those who come into contact with him have the faith to tap into their own inner champion.  Derrick Martin is a man with the heart of a champion and a tremendously grateful soul.  Derrick’s success is the best kind because it is the gift that keeps on giving.  Watching Derrick give back to a community where his NFL journey started, is a cause we can all get behind.

For the game schedule, you may visit:  http://www.maxpreps.com/high-schools/thomas-jefferson-spartans-(denver,co)/football/schedule.htm