Jelly Spreads with Jahvon Quinerly and the Editor of BAC Magazine in Hackensack, New Jersey. A point guard is a player who directs the team’s offense. But what’s a shooting guard you ask? Although I hadn’t heard of the made-up position either, I’m going to say the star of this article coined the term: a shooting guard is someone who has a passion for shooting and who also knows how to control the ball while playing offense. Meet Jahvon Quinerly; he a is a 6’1 basketball player from New Jersey currently playing in his last high school season before darting off to bear a Villanova jersey. If you haven’t heard of Quinerly then you’ve at least heard of his nickname: Jelly. He’s part of the Jelly Family, or “Jelly Fam” for short. “Jelly” is a term regarding a specific finger roll off the ball that leads to the ball gracefully falling through the net. It’s a talent that takes practice to master and must be witnessed or have proof via a video recording to hold merit. The “Jelly Fam” coined it “Jelly” because it’s such a sweet move, in essence of jelly being sugary sweet.

Quinerly grew up in a house full of love, joy, and support. He remembers being as young as eight years old playing ball in the local rec center: once he got his hands on a ball he was hooked. Speaking with him first hand I could tell right away he is beyond thankful to have grown up with such loving and supportive parents who drove him to workouts, practices, and games all over the city. He will be the first to tell you that God has a plan for him and he wouldn’t be where he is today without the support of his family and close friends.

Being part of a tight-knit group helps make Quinerly feel supported. His success is shared and celebrated among his close friends with whom he grew up playing basketball. His close friends have been by his side since grade school. Some of Quinerly’s best friends include Isaiah Washington, Louis King, Nazi Reid, Atiba Taylor, and Luther Muhammad. Quinerly remembers pulling two-a-days with some of those friends back in middle school. If that doesn’t show love for the game, I don’t know what does.

That hard work and dedication paid off in middle school earning him and his team two national championships in a row in 7th and 8th grade. Three out of five of his friends, including him, were dubbed McDonalds All Americans. Quinerly has played basketball in nearly every state in America and even had the chance to play in Italy. Albeit he has nearly 300,000 Instagram followers, he hasn’t forgotten his roots or what’s helped him to succeed: a loving family and uplifting friends. Two of his life-long friends actually came up with the term “Jelly Fam” back in grade school while playing ball in New York.

To say “Jelly Fam” has piqued an interest in today’s youth who play basketball would be an understatement. Quinerly has an interest in today’s youth as well as a message for them: “Get an education.” Although Quinerly has officially chosen Villanova as the college he will play basketball for, his head is not in the NBA clouds. He is a strong believer that an education is a precursor to succeed in this world. Don’t get Quinerly wrong, he’d love to play in the NBA, but he’ll tell you, “The ball will stop bouncing one day, so you have to get an education.” Besides being a role model for today’s youth, he also has two little brothers who look up to him. Quinerly is constantly sharing his favorite saying with his younger brothers, “Books before ball.” Quinerly has 3.6 GPA, is a part of the National Honor Society, and has received a plethora of academic accolades. He wants to be an example not only for his brothers but also for the youth of America. One day he hopes his hard work will pay off so his parents no longer need to work. If you want to be more like Quinerly, start by hitting the books, stay in school, and make sure you put that “Jelly” on. 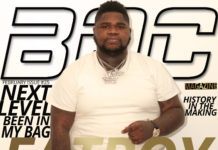 In my Bag with Fatboy SSE and the Editor of BAC Magazine in Los Angeles, CA.